Toyota’s dominance of the Australian new car market continued throughout August, with its sales more than double the next-best brand in Mazda. At a global level, the company also took the opportunity to announce that production for the following month would be slashed by nearly half on the back of a semiconductor shortage causing havoc across the industry. That move is not in isolation, however, with a number of other brands following suit.

For the third time in its history, Kia finished third in terms of new car sales for the month. Both of the prior occasions were recorded in the last 18 months, and with the company now recording more sales than sister brand Hyundai for the fourth consecutive month, Kia is undoubtedly in the midst of the best period in its history down under. What’s more, Kia edged ahead of Ford, representing another feather in its cap.

Chinese vehicles remain popular across the new car industry, with MG slotting into 10th position among the best-sellers, and further down the list there has been strong growth for Great Wall Motors, Haval and LDV. Strength from these names has seemingly come at the expense of former favourites Honda and Nissan, with the latter barely a sight among the sales these days, and Nissan missing the cut for the top 10 for the first time in nearly three years.

With car shortages first hitting the industry this time last year, and many catch-up orders only just now being met, the best-sellers in August all delivered significant gains on last year. Unsurprisingly, with its commanding position as leader of the new car market, Toyota also featured the most vehicles among the best-selling models on the market. The Japanese brand had six vehicles inside the top 20 vehicles sold last month, and four in the top five alone.

The Hilux remains Australia’s most-loved car, with sales up 267% year-on-year to a total of 4,470 units. It was ahead of its arch rival in the Ford Ranger, which recorded 3,959 sales in August.

Rounding out the top five were the Corolla, with its best result for the year thus far in 3,563 sales, followed by the RAV4 and the Prado. In the case of the Prado, the model also recorded its best sales result in 2021, with sales soaring 452% to 2,731 units.

Other familiar names included the Mazda CX-5, Hyundai i30, Isuzu D-Max and the Mitsubishi Outlander, while the newcomer MG ZS backed up its spectacular effort from July to record a second appearance among the most sought-after cars. 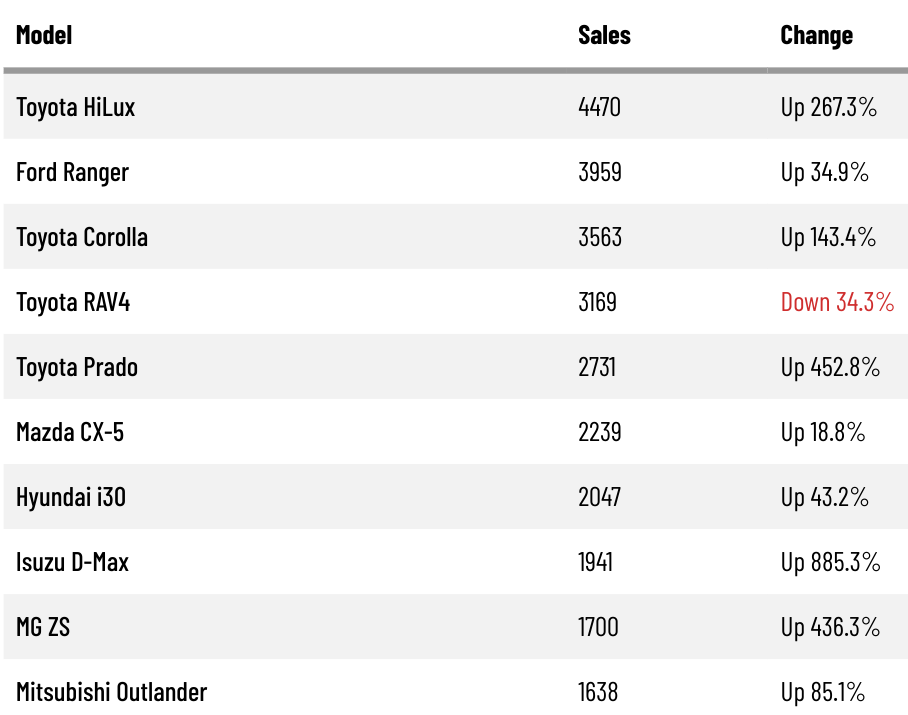