Although the broader market was relatively weak on the back of supply constraints, Toyota, Mazda and Mitsubishi were still the names to watch as they delivered the highest sales among all brands last month. Sales fell by double-digits for all three, but the trio have been a regular sight atop the list of the best-selling cars for some time now.

On the other hand, Kia managed to post growth last month, with its sales up 8.3% versus April, 2021. That was better than its sister brand, Hyundai, which not only fell behind its peer across the month, but on a year-to-date basis as well.

The next three names probably won’t come as a surprise to anyone. Ford has been a regular sight in the top 10, and a sharp drop didn’t diminish that. However, the blue oval brand was almost leapfrogged by the market’s hottest performer in recent times, MG, which recorded sales growth of nearly 60%. Isuzu eked out positive growth as well, even though it only sells one SUV and one ute.

The last two names to make the top 10 were Mercedes-Benz and Nissan, with the latter being lucky to hold on amid a sharp slump in sales.

The Toyota HiLux extended its lead atop the list of the best-selling cars, putting daylight between it and the Ford Ranger. It puts a spin on things, because Ford’s Ranger ended last year making inroads in terms of closing the gap, but a near 30% drop last month has scuttled that progress. It follows a disappointing result in March where the Ranger placed sixth, well below its usual spot.

The Isuzu D-Max and Mitsubishi Triton also featured prominently in April, which means there were four utes among the top six most popular cars last month.

The MG ZS was the biggest mover among the frontrunners, with sales up 42.4% year-on-year. It wasn’t the only MG vehicle to rank highly, with the HS also making its debut in the top 20, setting a record for that badge. 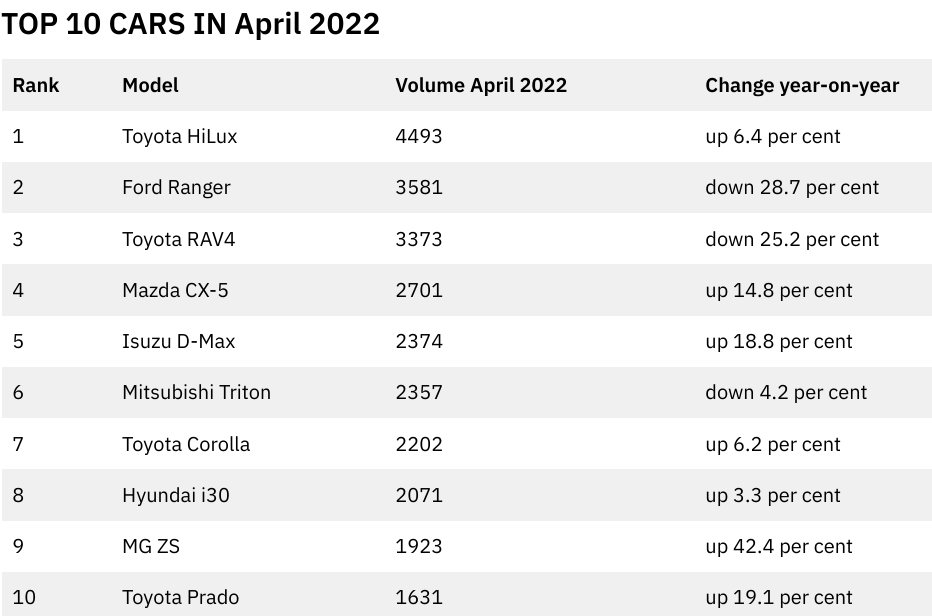