Having seen the extent of the slump in new car sales for what seemed like an eternity, the remarkable turnaround in progress has continued in 2021 on the back of a solid result for April. This took the winning streak for sales growth to six months, an impressive feat in light of the aforementioned downtrend, although weak baseline figures last year have helped the cause.

Nonetheless, supply constraints still seem to be one issue preventing things from being even better, with the industry still being crippled by a shortfall in cars to meet demand. The problem is one that is more relevant to the global car industry, but certainly being felt on our shores also.

Traditionally a quieter month due to school holidays and the Easter break, the result for last month was among the best that we’ve seen, with new car registrations totalling 92,347.

The strength of these numbers can perhaps be attributed to the fact that delays in order fulfilment are seeing registrations roll into current months. For example, many of the cars reported as sold last month were actually ordered well beforehand, with supply only dripping through now.

Speaking on the matter, James Voortman, the CEO of the Australian Automotive Dealer Association (AADA), said: “To get your car as soon as possible you need to get in the queue now to avoid even longer waiting times down the track”.

Year-to-date, car sales are 30.7% ahead of the same time last year, coming in at 355,995 new car sales, and if current momentum continues, it appears as though we are on track to potentially top 1 million new car sales by the end of the year. 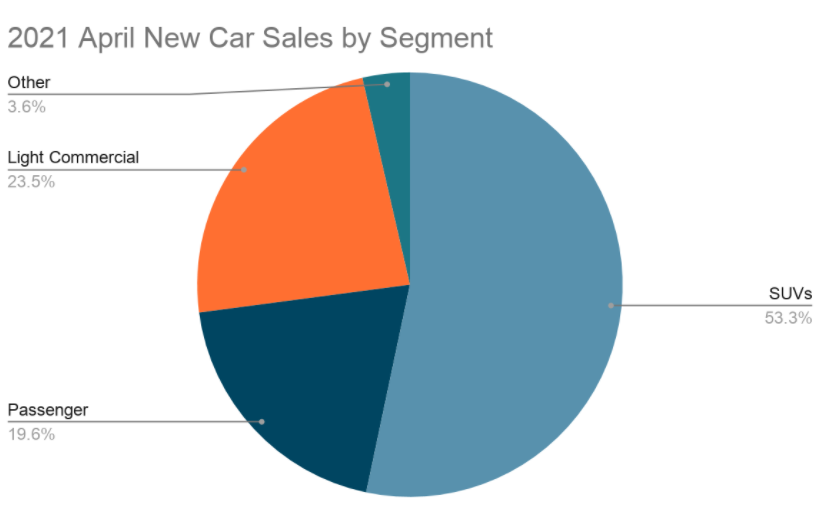 Once again, light commercial vehicles were well in front of passenger vehicle sales, reminding us that a lot of the uptick in buying is coming from tradies and businesses that now seem to be flourishing post-COVID amid a number of tax incentives. In total, however, SUVs remain dominant in the market, with 49,176 sales, while light-commercial vehicles edge passenger cars at 21,714 sales versus 18,064.

Stay tuned for Part 2 of our review into new car sales for April 2021, covering vehicle makes and models.