All of the nation’s leading car brands were hit by the sales slump last month. Across the entire line-up of all car brands, just MG and RAM managed to eke out year-on-year sales growth for the month of April.

Toyota, the perennial market-leader, declined 31.8%, although that was far better than the average across the broader market. In fact, the Japanese brand’s market share increased to an all-time high of 26.5%, representing more than one in four sales across April. The RAV4 managed to mitigate the extent of the brand’s sell-off, which was a success story in its own right.

Elsewhere, despite its sales slumping 44.9%, Kia managed to notch up an achievement. The company finished outright third in the monthly chart for the best-selling brands, a position that it had previously never attained. Of course, that comes on the back of a significant impact to some of its closest rivals, with Mazda, Ford, Hyundai and Mitsubishi all recording a drop in new car sales that was above that posted by the market.

BMW also posted an achievement of its own, slotting into the top 10 for the first time in Australian sales history courtesy of its 1,703 sales, a number that only decreased 5.7%.

The results also depict how few companies achieved more than 2,000 sales across the month, with just five brands reaching this threshold, whereas normally it would be in the vicinity of 10-12.

In what was an unprecedented achievement, Toyota occupied five of the top six spots on the list of the best-selling cars across the market. This included the popular HiLux, but also the RAV4, LandCruiser Wagon, Corolla and Prado.

Looking further down the list, Toyota sold eight of the top 30 models. The RAV4 was the major standout across the entire market, with comparable sales up a whopping 54.4% compared with April 2019. The car has proven extremely popular and almost single-handedly underpinned the growth of the hybrid category.

Sales were down for each of the other leading car models, however, it was largely a case of familiar faces in terms of the names that featured on the list. Nonetheless, the absence of any Mazda, Mitsubishi and Mazda vehicles made for interesting reading, yet also emphasised how much of a stranglehold Toyota has over the market. 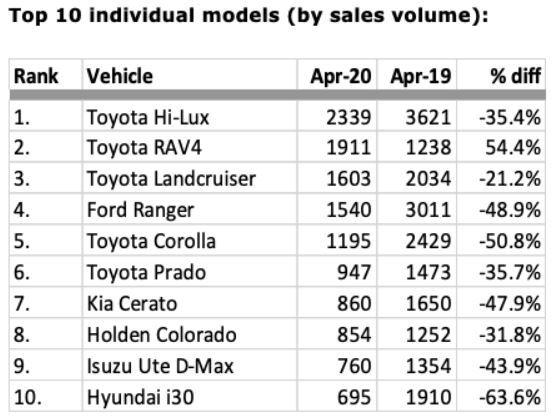