With COVID-19 lockdowns across the country all but diminishing new car buying sentiment, April marked the single most challenging month for the car industry in several decades.

The impact of COVID-19 has had a profound impact on the industry, despite the fact dealerships were granted exemptions to operate as essential services.

Nonetheless, while the headline figures were disastrous, the local market still fared much better than international markets including the likes of the UK, where new car registrations plummeted an astonishing 97% as showrooms were closed across the country.

New car sales for April plunged 48.5% to 38,926 units, culminating in a result that was equivalent to the worst seen in decades. Last year’s comparable result was 75,550 sales, which was already markedly down on the year prior. At the end of April, year-to-date sales were tracking 21% lower than last year’s cumulative tally of 272,287 registrations.

Unsurprisingly, sales were down across most of the states and territories, with social distancing rules prompting cautious consumers to stay at home and tighten their spending. ACT was the only region to buck the trend, with sales growing 25%. In fact, it was the third month in a row where sales have increased in the region, which follows damaging hail storms in late January. 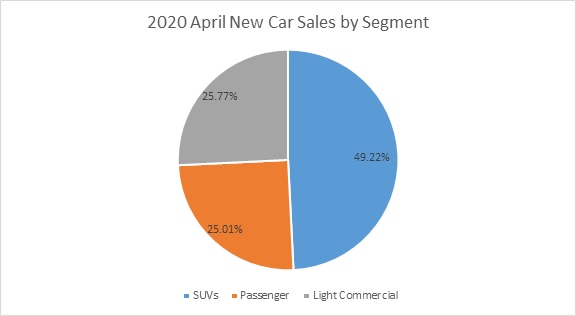 The leading three categories of vehicles represented more than half of all new car sales last month. This included 4x4 utes (18.8%), followed by medium SUVs (18.1%) and then small passenger vehicles (12.1%).

Sales of electric and hybrid plug-in cars fell 27.6%, albeit this was from a very low base of 181 units in April last year. On the other side of the fence, however, hybrid demand is proving incredibly resilient. Sales from this category stormed higher by 64.1% to 2,809 units, once again underpinned by the Toyota RAV4, where the waiting list has shortened considerably.

Stay tuned for Part 2 of our review into new car sales for April 2020, covering vehicle makes and models.