In our first piece covering 2019 new car sales, we looked into overall sales across the industry as well as a breakdown by vehicle segment. This time around we’ll focus on how different makes and models fared last month.

It was a consistent trend for the overwhelming majority of car brands last year, with sales declines featuring prominently among the board. Among those brands which managed to defy the trend, you mainly had to look outside the top 10, towards some of the luxury and/or niche brands like BMW, Skoda, Volvo, MG, LDV, Porsche and RAM, to name a few.

Nonetheless, the dominance of Toyota atop the charts is clear for all to see, with its sales more than double that of the next-placed manufacturer, and in fact, still greater than the second and third brands combined. This is despite sales in the company’s cars falling 5.2% last year.

Mazda and Hyundai followed with deteriorating sales of 12.3% and 8.6% across the entire year, with the former hurt by some of its adjustments to pricing across recently released models.

Mitsubishi fared better than the market average, even though its own sales dropped by 2%. The company released a series of new vehicles throughout the year that competed well against their peers on account of sharper pricing.

The clear standout for the year was Kia. It was the only major manufacturer to increase its sales, growing an impressive 4.6%. In the context of a nationwide sales slump, its value emerged to many buyers and the company set numerous corporate records in the process.

The same fortunes were not shared by Holden, which had a disastrous year as its sales dived 28.9% to a total of 43,176 units, the worst in decades. While the company has cut its range, it has also become abundantly clear that the once-loved brand is no longer viewed the same in the eyes of many Aussies amid the compelling value and reliability being offered elsewhere.

It was a series of familiar faces at the top of the best-sellers list, as the Toyota HiLux and Ford Ranger continued their dominant run as Australia’s most-loved vehicles.

The most popular passenger vehicle was the Toyota Corolla, selling 30,468 units, which was then followed by the popular Hyundai i30, which was only slightly behind having sold 28,378 units.

The next four best-selling cars were all within a whisker of one another, although it is worth noting that the Mazda3 has dropped down the charts compared with recent years on account of its higher pricing.

The biggest mover is the new Kia Cerato, climbing its way into the top 10 and underpinning the company’s promising rise throughout 2019. 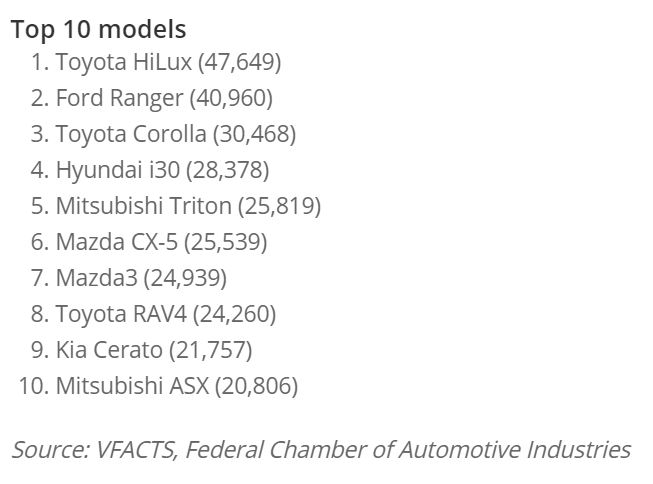