As 2019 came to an end, the year marked one of the worst in recent history for new car sales as a combination of macro events came together to ultimately stifle buying appetite.

Even though competition and discounting represented a chance for buyers to score a bargain, the industry was weighed down by political uncertainty, slow wage growth, tightened lending regulations, a volatile housing market and drought conditions.

Let’s have a glance over how the year ended.

No state or territory was spared from the slow-down, albeit Victoria (-8.7%) and New South Wales (-8.4%) accounted for as much as 60,000 of the decrease in vehicles noted above. The drop was more subdued in Tasmania, with a 2.3% decline, but at the other end of the spectrum, the new car market in the Northern Territory fell off a cliff, with sales plummeting 16%.

December also was the 21st consecutive month in which year-on-year sales for the month declined, albeit the pace of the drop let up somewhat, with sales falling 3.8% to 84,239 units compared with December 2018. 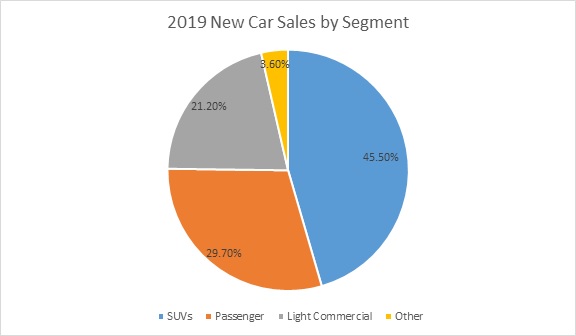 Amid the gloom of last year’s sales drop, there were still some positive stories to emerge for vehicle manufacturers, with SUVs and light commercial vehicles increasing their representation in the charts. SUV sales accounted for 45.5% of all new car sales in 2019, up 2.5% from the year prior, despite a 2.4% drop in the number of cars from this segment being purchased.

Meanwhile, light commercial vehicles were also able to shore up their stake, gaining 0.6% market share to end the year with 21.2% segment representation, even though sales fell 5.2%. These changes came at the expense of passenger vehicles, however, with the passenger vehicle market falling 3.1% to 29.7% market share on the back of a huge 16.5% slump in sales.

Toyota’s focus on the hybrid segment helped that channel significantly expand sales by 53% to a total of 30,641 units. The percentage gains were similar for electric and plug-in hybrids, however, they totalled a much more modest 2,925 units.

Finally, the sales squeeze was felt across all buying channels, with private sales down 7.6%, business sales lower by 8.7%, rental vehicle sales decreasing 4.5% and government fleet sales declining by 5.9%.

Stay tuned for Part 2 of our review into new car sales for 2019, covering vehicle makes and models.